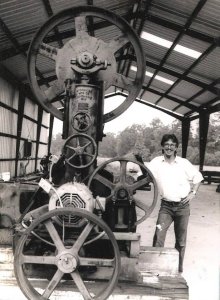 From the 1992 Ponchatoula Times article: “Albany Woodworks President, Founder, and Owner Richard Woods is pictured beside the company’s huge re-saw blade, the heart of an operation that will be fully automated.”  Full article below. 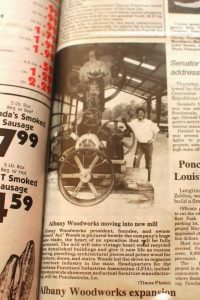 This is a story about how a determined family in our area began a business 13 years ago with no capital and no equipment, a business which is now one of the top two of its kind in America.

Or, this is a story about how in the 1990’s an entrepreneur among us is making a living buying back the beautiful Louisiana timbers that were harvested wholesale south of Ponchatoula and shipped up North to build the factories of the Industrial Revolution.

Or, this is a report on the latest success of a man who took the time along his way to personal achievement to help co-found and organize Louisiana’s first furniture industry association, soon to be headquartered in Ponchatoula.

It is all of the above, and more. An inspiration to those who dream of staring their own business,  a challenge to whose who would do something to reverse the plundering of Louisiana’s natural resources, an example of how Louisiana can prosper by playing up its human potential: when it’s Richard “Ani” woods you’re writing about, the big picture is the only way to get in focus.

And he begged us not to let this story sound like bragging.

He’s not. We are. The simple truth is that this is one business story that speaks volumes about the tight little boom of prosperity in this small corner of the state.

Now you can add to the local expansion of building material businesses a major manufacturing operation in nearby Albany where Albany Woodworks, is moving into a new mill that promises to drastically increase the amount of vintage wood products that will be milled in this area.

“I hope to do in a single day with this mill what my original operation took a week to do,” said Woods during a recent visit to his mill of North Café Line Road. What he did with his original operation was to compete in a unique business, the recycling of vintage wood and brick.

The brick came as a sideline of sorts, after Woods invented a machine that can clean off old mortar, on-site, as a building is being torn down. He was drawn the demolition sites by the mighty timber holding the old building up, timbers he purchased from the wrecking crews, shipped south to Albany, then re-milled for new use at his sawmill.

In 13 years Ani and his wife Jude have build their Albany Woodworks into one of the top two firms in America specializing in re-milled vintage wood.

Now came the expansion, the first major one since Albany Woodworks began with a borrowed saw and a dream back in 1979.

The business was housed under sheds covered with old tin, piles of milled wood protected by sheets of plastic. A shed became an office. Finally a showpiece building using the various products was constructed on-site. But the company’s success drove the need to build larger facilities.

Typical of the thinking that launched the business in the first place, the new 8,000 square foot metal mill building erected on thick concrete is one large recycling project:

“We bought a used steel frame building for pennies on the dollar in Mobile, Alabama and we put new sides on it after we erected the frame in Albany. Forever in the salvage business….” mused Woods.

He said his crew will dismantle the original mill buildings, turning the slab of one into a basketball court and using the others for dry storage. But the new mill is not just a new building. “We are automating all our mill equipment with move. We’ve renovated a vintage 54 inch resaw bandsaw for our main blade,” began Woods showing off the control box that allows the entire operation to hum along with from one to three men, aided by automated machinery and an assembly line.

The Times was escorted on a walk-through of the process inside the mill where reclaimed prime wood beams are re-milled into a variety of new wood products capable of matching original antique architectural pieces or furniture.

The capacity of the new mill is judged to be capable of producing 10,000 board feet of completed mill products per day. Even the sawdust is used in the new process, after it is vacuumed out of the mill to a holding are. It is then burned as fuel for the mill.

Custom designed for Albany Woodworks’ unique operation, the mill is now self-sufficient eve to the extent that it brings its own heavy duty blade sharpening machine.

Monday, crane operators were expected to move into the new mill building the huge planers and saws now in the old buildings. Woods says the new operation should be up and running in three weeks.

A major business known across America is growing in leaps and bound in our immediate vicinity, and all it took was endless hours of hard work, vision, determination, the ability to inspire people, and an understanding of the materials market, luck, inevitable heartbreak, gallons of sweat, and constant change to keep up with the market and the competition. Nothing to brag about, surely.