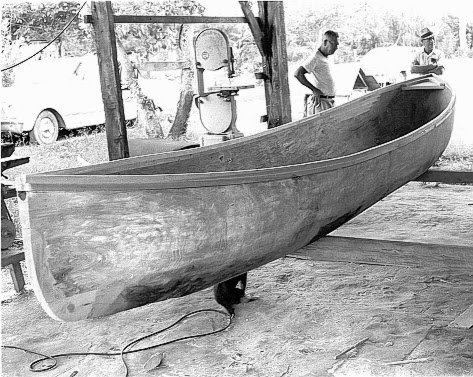 Fun Fact: Pirogue, from the Spanish word piragua, is a small flat-bottomed boat historically constructed from cypress used to navigate the Louisiana swamps.

The ability to carry heavy loads and maneuver in shallow waters made it an ideal choice for the Lewis and Clark Expedition and on D-DAY with Higgins Landing Crafts based on its design. Higgins Industries had originally perfected a shallow -draft boat could operate in only 18 inches of water, running through vegetation and over logs and debris without fouling its propeller. It was based off the pirogue concept which was necessary when maneuvering through Louisiana swamps.  The boat design was called the “Eureka” design.

The US Navy tested the Eureka design and approved it for further development and the landing craft, vehicle, personnel (LCVP) or Higgins Boat was born. After D-Day, Dwight D. Einsenhower declared “Andrew Higgins … is the man who won the war for us. … If Higgins had not designed and built those LCVPs, we never could have landed over an open beach. The whole strategy of the war would have been different.”

Fast forward 70 years and Albany Woodworks played a key role in teaching children about these amazing crafts at the World War II Museum in New Orleans. By donating the antique heart pine beam for the keel and ribs of a construction of a new, historically correct Higgins Boat. For more information, check out our blog “Albany Woodworks Pine Beam used in Historic Re-Construction of D-Day Higgins Boat“.