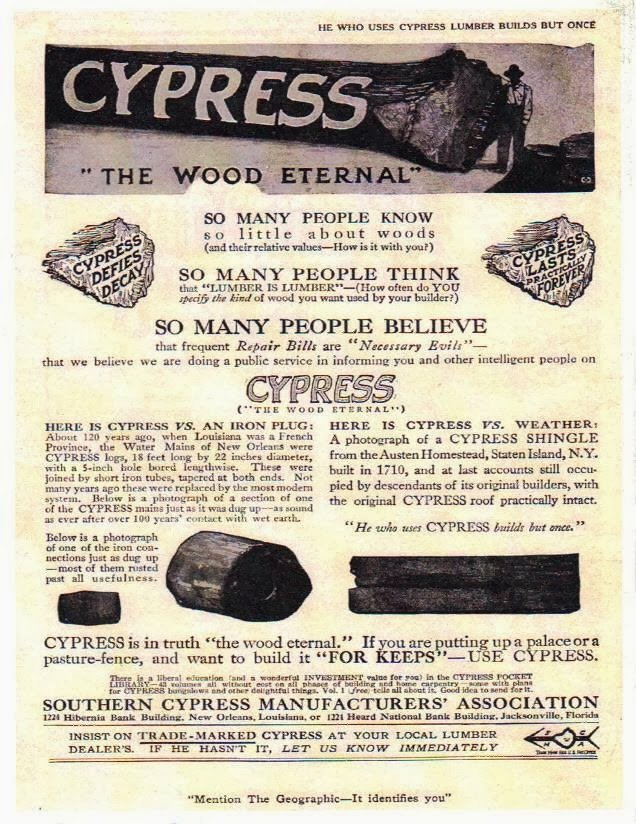 (Above): Submitted by one of our viewers: an original ad for Louisiana Cypress water pipes.

It states “About 120 years ago, when Louisiana was a French Province, the Water Mains of New Orleans were CYPRESS logs, 18 feet long by 22 inches diameter, joined by short iron tubes, tapered at both ends. Not many years ago, these were replaced by the most modern system. Below is a photographer of a section of one of the Cypress mains just as it was dug up– as sound as ever after 100 years’ contact with wet earth.” 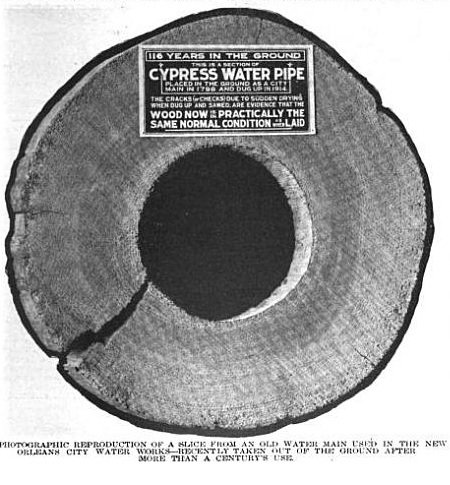 After a little more digging, we were able to find out a bit more about this unique use of cypress. Known as “the wood eternal”, cypress was the preferred material for everything from coffins to water mains. It’s natural rot resistance made it an ideal material for these applications. Plumbers that were replacing the water mains in New Orleans in 1914 were shocked when they discovered that the original water mains installed in 1798 were hollowed out cypress logs. Not only that, but that these logs were decay and rot free nearly 250 years later!  The success of the New Orleans water mains led to New York adopting the same method. The method of boring out the center of the logs is unknown.

The rot resistance of cypress was further tested when scientists discovered an underwater cypress forest in 2012 off the coast of Alabama. The trees were 60 ft under water and still intact. When logs were brought up to test the age of the forest, the smell of cypress permeated the air as scientists cut through the log. Not expected from what turned out to be a 52,000 year old tree!

Thanks to Donald Thibodaux for the great find! To find out more about the history of cypress, click here. #historydetectives