Blogger’s Note: To celebrate our 100th Albany Woodworks News & Events Blog Post, we look 100 years into our past with ‘This Day In New Orleans History.’  We visit the pages of the New Orleans Herald for the headlines of the day.  Published on Thursdays in eight to fourteen pages, the Herald served Algiers, a neighborhood of New Orleans located on the Westbank opposite the French Quarter on the Mississippi River, and the Central Business District, from 1905-1953.

(Above) The Potomac spent her early days as the Tugboat Robert W. Wilmot, in service to the W. G. Wilmot Coal Company of New Orleans, before being sold to the military for the Spanish-American war effort.

“Naval Tug Potomac Was The R. W. Wilmot.  The reported abandonment (Blogger’s Note: Reports of the Potomac’s abandonment due to ice reached the New York Naval Yard on February 14, 1914, a few days prior to this article) of the United States naval tug Potomac in the ice floes of the Gulf of St. Lawrence marks, perhaps, the final chapter in the eventful career of the former New Orleans tug Robert W. Wilmot.  An Associated Press dispatch received here Monday from St. John, N.F., states that the Potomac is held fast in ice, and was abandoned Saturday night by the thirty-six officers and men of her crew.

This powerful tug was sold to the United States government during the Spanish-American war by the W. G. Wilmot Coal Company of New Orleans, for which company it was built, and during its sixteen years of history as a naval tug participated in numerous thrilling rescues of life and vessels at sea, and had braved the dangerous ice coasts of the far north and south almost to Cape Horn.  Shortly after being sold to the government, and rechristened, the Potomac was assigned to the Atlantic fleet off Cuba, and salvaged the Spanish steamer Sandoval, and assisted in saving and towing to American docks a number of other Spanish vessels captured or disabled in the battle off Santiago, Cuba.

The Potomac assisted in towing the world’s largest floating dry dock, the Dewey, from Sparrows Point, Md., to Manila, having taken the dry dock as far as the Suez Canal.  The Potomac also had the distinction of being the first relief vessel to reach Martinique after the great earthquake disaster a few years ago (Blogger Note: Author may be referring to the 7.9 Martinique Earthquake, December 3, 1906). 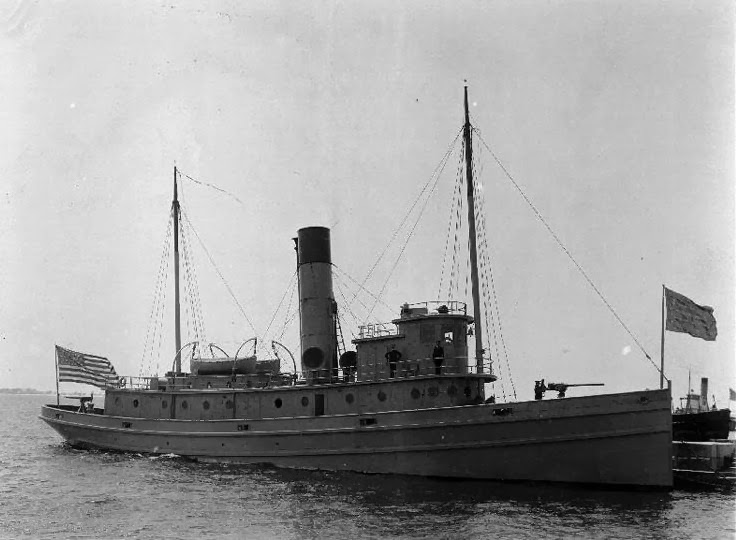 (Above) The former Robert W. Wilmot, rechristened as the USS Potomac in service to the United States Navy for many years before being decommissioned in 1922.

The Potomac was of steel construction and finished in expensive mahogany and sycamore.  It had triple-expansion engines, capable of developing 2000-horse power, and at the time of construction, in 1897, was the most powerful tug in the world.  It was sold to the United States navy for $125,000.”

Blogger’s Note: The Potomac left Newport, Rhode Island on January 28, 1914 to rescue vessels icebound off Newfoundland. The Potomac was herself iced-in and abandoned on 14 February, but would ultimately survive her icy fate.  Salvaged in the late spring, once the ice had thawed, and arriving to the New York Navy Yard in early June, where she received updating and repair.  The Potomac returned to the Atlantic Fleet for the remainder of her military service, spending time in the Panama Canal Zone.  Decommissioned on June 26, 1922 she was struck from the Naval Vessel Register on July 31st and sold for civilian service to the New Orleans & Bisso Towboat Company on December 1st of that same year.